Some of the most important proven benefits of Metacam, for its use in mild to moderate mastitis, were discovered in the Mammary Study1.

This was a study that looked at the effect of treatment with Metacam on milk production, somatic cell count, probability of re-treatment, and culling of dairy cows with mild clinical mastitis. It is the largest study of its kind ever undertaken, involving 727 dairy cows across 15 herds in New Zealand and it looked at a new treatment model of farmer–diagnosed mastitis. 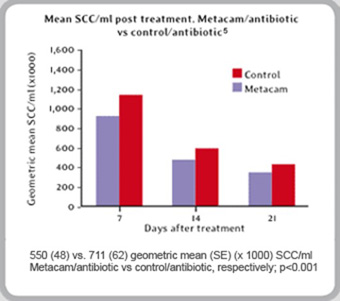 Adjunctive use of Metacam (combined with an antibiotic) resulted in a significantly lower overall SCC in the Metacam treated group compared to the control vehicle and antibiotic group (p=0.001)1

Metacam reduces the risk of culling 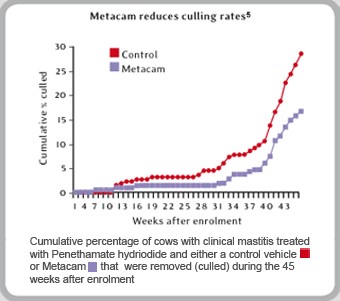 Adjunctive use of Metacam (combined with an antibiotic) resulted in a highly significant 42% lower culling rate compared to the control vehicle and an antibiotic.

In clinical trials conducted by a research team at the University of Guelph, Metacam 20 mg/mL Solution for Injection was evaluated as an adjunct therapy in calves with naturally occurring diarrhoea.5 The team determined that calves treated once with Metacam at the onset of diarrhoea:

A single treatment with Metacam 20 mg/mL Solution for Injection at the onset of diarrhoea provided relief from the pain of diarrhoea and, more importantly, helped keep the calves eating and growing and over the trial the Metacam treated calves had an additional 4kg growth rate. This clearly shows the importance of pain relief and the use of NSAIDS in calves.

Which NSAID is best?

In terms of cost per day the long acting products such as Rimadyl and Metacam deliver pain relief for about  for 3 days. They also benefit from a single injection sub cut or i/v. The benefits to the cow far exceed this in many cases as the NSAID may protect against the severity of milk drop, other diseases such as DA’s or ketosis

Metacam is very widely researched and has been shown to control clinical symptoms of pain and inflammation for 3 days. Less work and research has been done on Rimadyl.

Rimadyl is a zero milk withhold product and is a very useful product when you are giving pain relief alone e.g managing lame cows.

Metacam is widely used for cell count and reduction of swelling in Grade 2 mastitis cases. If given alongside antibiotics milk withhold is less relevant.

The shorter acting Finadyne is used primarily for acute or toxic mastitis. If this is given I/v it has a very rapid action and is the drug of choice. Finadyne is a very useful drug for acute pain but needs to be repeated daily.

Ketofen is used as an ultra short acting painkiller in cows where meat withholds may be a consideration. A down cow which you may opt to slaughter tomorrow. The product is significantly more expensive than Finadyne

We probably  under use NSAIDS. Try out some Metacam on your next calves you disbud and castrate. Look to use alongside electrolytes in calf scour. Consider the benefits in Grade 2 mastitis in the first 100 days of milk and always consider its use in pneumonia or painful conditions in any aged cattle.