To book an appointment or to access one of our services, please contact us. We offer a range of services for our patients, whilst adhering to social distancing rules. If you or anyone you have been in contact with has COVID-19 symptoms, has tested positive recently or is currently waiting for test results, please contact us to re-arrange your appointment. Click here for more information. 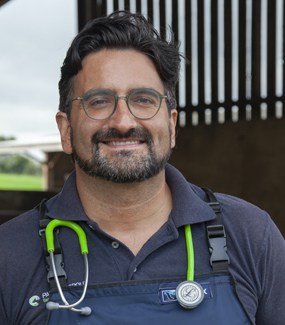 Diego graduated in Veterinary Medicine in Bologna, Italy, in 2007. Immediately afterwards he specialized in Avian Pathology, Rabbit and Game. He has worked in numerous surgeries in his region in Italy, providing advice on exotic animals that have always been his passion.
In Italy he worked for three years as a Veterinary Commercial Technician for a company that produces supplements for dairy cows. Diego also worked with his local Zoo of his region for more than two years used to own an exotic pet shop and has completed an International Master’s Degree in Marine Biology. Diego began his adventure in England as a Meat Inspector, engaged in quality control of meat intended for human consumption.
After a brief experience in another small Practice in the south of England, he started working with the Park Vet Group in September 2018.
In his spare time he does a lot of sport, tennis being among his favourites, watching his favourite football team , Juventus, and taking long walks in the countryside.