Keep up to date with Park Vet Group latest news

A prize-winning gun dog needed intricate surgery at Park Vet Group in Glenfield to remove a 3.5cm grass seed from her tear duct.

Five-year-old labrador Annie had been suffering for weeks with mucus and pus being discharged from her left eye which was also red and sore.

Eye drops, antibiotics and even having her eye flushed twice had all failed to solve the problem but did help confirm the cause was almost certainly a foreign body in the eye duct. 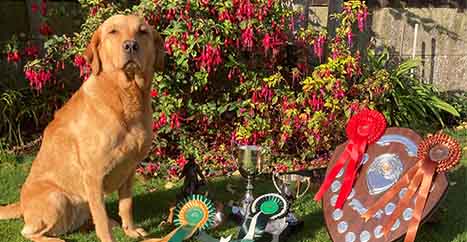 “The only way to know confirm this was by surgery, which was obviously challenging due to the tiny size of the tear duct meaning there was a very narrow space to work in.

“We used micro crocodile forceps to open and explore the tear duct, which confirmed there was a foreign body inside.

“We successfully removed it and it was later identified as a grass seed. It’s remarkable that something 3.5cm long could penetrate something as small as the tear duct.

“We’re delighted that surgery resolved the complaint and the secretions quickly cleared.

“Annie’s post-operative check two weeks later confirmed the inflammation of the tissues had settled down and the operation had been a complete success.”

Owner Carol Probert, from Shepshed, has had Annie since she was an eight-week-old puppy and trained her as a gun dog, so the labrador spends a lot of time running through grass.

She was still amazed when she saw the size of the grass seed which had penetrated her pet’s tear duct.

Carol confessed: “I must admit I was as surprised as anyone when they identified the problem was a grass seed in Annie’s tear duct.

“It must have been a real ‘bullseye’ to have made it through such a tiny gap, just a millimetre either way would have made it impossible.

“Happily, though, Annie’s absolutely fine now. In fact, she’s entered four dog trials since her surgery and won three awards, so she’s clearly back to her very best!”

No wonder Carol was full of praise for Mark, his fellow ophthalmologist Stefan Savoy and the rest of the Park team.

She added: “They were very good and explained everything to me beforehand and kept me fully informed throughout. I’d definitely recommend them.”